Ron van der Ende works as a sculptor in Rotterdam, the Netherlands. Recently he built a series of perspective-reliefs: almost flat cars constructed in old wood. Here you will find an example of his work: a GAZ M21 Volga, my GAZ M21 Volga! 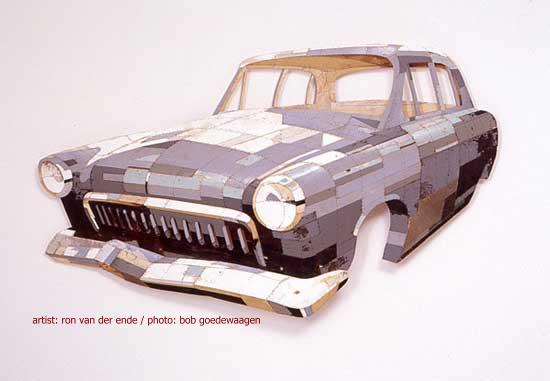 NRC HANDELSBLAD 12 januari 2000 (translated by Ron van der Ende)
Flat wooden cars in the art gallery
Sculptor Ron van der Ende (36) makes cars out of scrap wood. "For me, it's about the feeling that a car invokes".


By our editor ARJEN RIBBENS
Rotterdam 12 jan. A red Ferrari Testarossa 500 TR, a Chrysler Town and Country, two weathered Dodge Chargers and a dented Toyota Corolla -the studio of sculptor Ron van der Ende looks like a showroom for second hand cars with a curious inventory. The floor is covered with a thick layer of sawdust. But not to absorb spilled motor oil, because these cars do not leak: they are made of wood.
The cars are half the size of real cars and are stripped to weel-less carcasses. Still it will be easy for the enthusiast to identify the models, that's how accurate Van der Ende has copied the originals. But something is strange here. Ingeniously the sculptor manipulates the eye of the viewer. The works are best described as three dimensional perspective-anamorphoses, to be compared with the paintings on a long wall that can only be seen when viewed at an angle. Van der Endes cars are best viewed from the front. Then the viewer will be dazzled by the perspectivical suggestion. Only on close inspection will be revealed that these cars are only a half foot deep.
A vocabulary born out of necessity, the artist explains. "Some time ago I was building wooden scalemodels of submarines. I was looking for a new subject. Cars have a nice, complete shape. Take the weels off and they are floating through space. But to depict metal shapes in wood turned out to be technicaly rather tricky.
" Two months he toiled on an 80 centimeter large scalemodel of an Opel Kadett."Calculating, measuring, building - a tough job. Then when I also developed a back problem, I knew things had to be done differently."
After a while he had a thought. Why not to make three dimensional cars in an almost flat plane? The realisation of that plan started behind the computer. On the internet Van der Ende found pictures of cars that had an interesting perspective. These images he altered on the computer with Photoshop, after which he used an overheadprojector to place the contours of the sides on large sheets of triplex. By plotting the vanishing point of the image on the wall of his workspace with some rope, he was able to build a perspectively correct framework. The wooden frame he lined with scrap wood some of which he fished out of the Nieuwe Maas, the river behind his studio in the former departure hall of the Oranjelijn in Rotterdam. The seams of the small pieces of wood define the curved shape of the carrosserie, van der Ende does not paint the wood. He searches until he finds wood in the right color. For the Ferrari Testarossa he found it for example in the red of an old door from a former kingdomhall of the Jehovas Witnesses. "As you can see, old fashioned handycraft still exists", laughs the artist.
The first car from the Van der Ende-factory was a Chevrolette Chevelle from 1965, his own birthyear. "I was looking for a sturdy car with a high rock-and-roll content." After that he honored his brothers with models from their birthyears and for his Polish wife he built a Russian Volga. "For me it's about the feeling a car invokes. Exotic cars, I wouldn't want. I'm looking for memories I can share with others.."
And so the Dodge Chargers hanging in the gallery right now played a leading part in a popular television series in the eighties, the Dukes of Hazard. The Ferrari was driving around on his brothers model racecar-set. And looking for the sentiment befitting a car crash he ended up on the website of the firebrigade of Edithvale, a town in the Australian state Victoria. By e-mail the artist informed after the fate of the occupants of the dented Corrola lying helplessly on its back on the asphalt. Because, he explains, it wouldn'be proper to make a piece of art from a fatal accident.
His work appeals to a large audience. When he exhibited his first four scrap cars in october in Galerie Delta in Rotterdam, there was a run. "Only just I did not need to call the police on horseback to kick the people out", as the gallerist Hans Sonnenberg remembers the exhibition by his "prima ballerina." "Passers by, families with prams, for a whole month they were drawn in by rons sculptures. It had never been so busy."
Most art is boring, Ron van der Ende says. "I really want to make something that is accessable. It's right that my cars are valued by art collectors as well as by people that walk into the gallery from the street. I hate snobbish, navel-staring art. And as a control freak I also want to have a grip on the way my work is understood."
For the upcoming KunstRai Van der Ende will probably build another series of four cars. After that he wants to investigate whether his technique of squashed wooden cars is also suitable for other subjects. He has already collected pictures of helicopters, shipping disasters and molten nuclear plants. But on his bike he realised that the beauty of the city will be his next subject. "Appartment blocks dissapearing into the mist, that might be quite something." 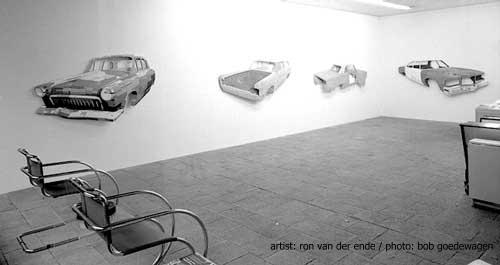