The development of the Volga

Development
The development of the GAZ M21 Volga started during November 1953. The first drawings were made by the constructor Alexander Mihajlovich Nevzorov. The factory got the opportunity to start from a blank sheet of paper. The new car had to show the Soviet capacities to build a representative car who could equal the American cars. During 1954 the first actual driveable prototype was build. The first prototypes were tested with an engine equipped with a chain driven camshaft and special half round valve chambers. The constructors did not manage to make these new items ready for production. Instead an improved Pobjeda engine was used for the prototype series. The first prototypes were equipped with a new type rear axle. This item also did not make it into production. A hypoid axle was used for the production models. The prototype was equipped with a M20's side-valve engine in the engine bay (enlarged to 2432cc / 65 hp). The car was equipped with four lever shock absorbers.

The body design was completely new. Lew Eremeev was responsible for the design of the M21 Volga. Next to Lew Eremeev the name of Andrei Lipthart, the designer of the Pobjeba, was also mentioned. The design was a good mix of American and European designs from the fifties. A nice design detail: the air resistance value is 0,42 (M21), its points out that during the fifties air resistance was not a really hot item. It is clearly to see that the designer, when designing the M21 Volga, took a good look at mostly American cars. One of the obvious used design examples is the Ford Custom. It is told that the M21 was the most American car ever build in the Soviet Union. The panoramic windows were typical fifties. For American standards the Volga was a small car, only 4 meters and 83 centimeters long. For European standards the Volga was a large car, placed in the upper middle class. The car was equipped with a 3 wave radio set and a large electric clock. At the hood a small chromed deer looked proudly to the road at front. 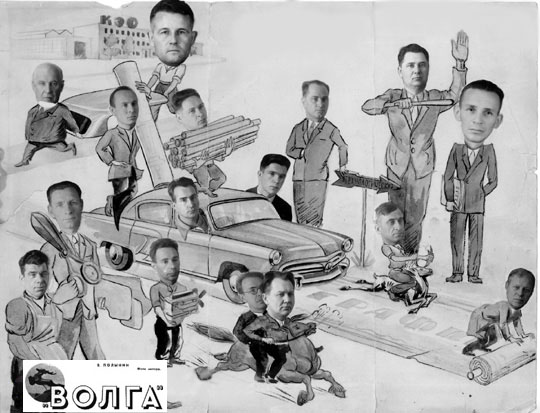 The Volga got the difficult task to be highly modern in a decade that the Russian infrastructure was still far behind. Only in the main cities and their surroundings you could find highways and pavement of good quality. On the countryside the roads were made of small stones or just sand. The Volga had deliver high speeds on the highways and the Volga had to be able to pass small muddy country roads. On top of this contradiction the technique of the Volga had to be simple because in the Soviet Union at that time there were almost no service stations. The owner had to be able to do all the maintenance himself.

In 1955 the first prototypes are ready to be shown at the press. De actual time to realize the Volga had only taken 2,5 years. That's why the prototypes were far from ready Before the Volga went to actual production in 1957 a lot a major changes were made. Most important change was the complete new engine. The Pobjeba engine was succeeded by a complete new design all light metal overhead valve 2445cc engine. This engine would be the first engine build by the ZMZ factory. Today this engine (in slightly changed form) is still in production for the GAZ 3110 series.

The Volga was the biggest car in the Soviet Union that "everybody" could buy. The GAZ13 Chaika and the ZIL cars were exclusive made for the government. As standard the Volga was equipped with a two wave tube radio and a large electric clock. On October the 10th 1956 the first preproduction series came out the factory. In 1957 "every" Soviet citizen could buy Volga for 5400 rubles.