Next to the prototypes the M21 series knows three model (production) series. The differences between the series are mostly based on new designed fronts and small details. Technical changes and improvements will come during the production and are not always related to model changes. For example the change of shock absorbers into a new telescope type took place during the production of model series two.

Series 1 (1956-1958) was introduced in 1956 as the M21 Volga. These series can be recognized through the grille with a horizontal bar which contains in the middle a big Soviet star and integrated flashers at both ends. This model was in 1957 also available with an automatic gearbox. From the start of the production the Volga is available with various chrome accessories. This mostly concerns chrome trimming around the windows. Standard the car was equipped with a radio set and an antenna. There was also a taxi model which did not have a radio set but instead a taximeter was mounted. The taxi also had separated front seats instead of a bench.

Differences between series 1 and 2 (1958-1962) were small. The grille has changed and is now made of large vertical bars. The grille can be in the color of the car or made of all chrome metal. The flashers are now separated from the grille. The dashboard changes halfway the production of the second series. The speaker housing is changed and the top of dashboard gets a vinyl cover matching the fabrics used for the car. In 1962 the introduction of M22 (estate) followed. The M22 is completely based on the M21. Technical the car is in continuous development. The series 3 (1962-1970) are the most seen, from these series by far the most were build. Again the grille has been changed and is now made of small vertical bars in all chrome. The flashers has been changed and are now better visible from the side. Also the rear lights changed. The round curves made place for more square forms, the basic form remained. The housing of the registration number illumination has also become more square and followed the lines that were introduced for the GAZ M13 "Tchaika" (Seagull). The bumpers are from now on smaller and half chrome and half in the color of the car. New accessories are chrome strips on the front and back wings (only on export models). The radio set is from now on an accessory, the antenna remains. The strips on the bottom of the doors changes (were partly aluminum, from now on all chrome metal). Changes in the cars interior are only found in small changes (new fabrics on the seats). During the production period of series 3 a lot of technical changes and improvements were made. The very popular "little deer" on the hood disappears at the introduction of the series 3. A lot of early Volga's also had to do without the "little deer" because of safety reasons. Instead of the "little deer" was a small "drop" placed which also disappeared at the series 3.

After 1965 the development of the M21 series stops. In 1965 the second edition of the third series was introduced. Floor shift became available on the M21 M model during the last years of production. The GAZ works started to develop a successor which went in to pre-production in 1968. The mass production starts in 1970 when the M24 succeeded the M21.

Originality
Most Volga's had a hard and full life. A complete original Volga is almost impossible. An other problem is finding the originality of the car. The factory made continuos improvements during the production period of the M21/M22. The estate followed the development of the sedan.

Fourth series?
The drawings show a brown Volga of which could be the fourth series M21. This variant was never build, probably because of the development of the M24. 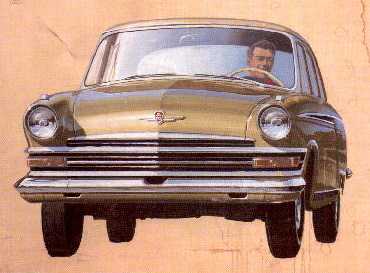