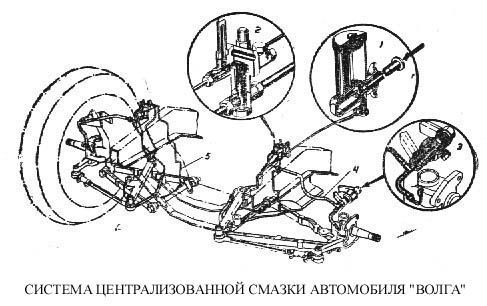 Up to 1960 the M21 was equipped with a central lubrication system attached to the front wheel suspension. For those days the front wheel suspension of a M21 was complex and therefore easy worn. The prevent the suspension from early brake down a driver operated lubrication system was designed. The system existed of a central oil drum, a complex system of hoses to all parts that easily wear and a foot operated oil pump. It appeared to be that the system was not very reliable. Not all parts were equally fed with oil. Although not a main issue at that time, the environment was not pleased by the system. There was a lot of oil spillage. When driving on muddy roads the driver had to operate the system every 100 kilometers, leaving oil on the streets every time.  Greenpeace did not exist a that time.  Because of the bad performance of the system and the large spillage of oil the system was discontinued. After 1960 the car was equipped with normal grease based components.